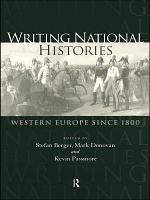 Book Description
This book examines comparatively how the writing of history by individuals and groups, historians, politicians and journalists has been used to "legitimate" the nation-state agianst socialist, communist and catholic internationalism in the modern era. Covering the whole of Western Europe, the book includes discussion of: * history as legitimation in post-revolutionary France * unity and confederation in the Italian Risorgimento * German historians as critics of Prussian conservatism * right-wing history writing in France between the wars * British historiography from Macauley to Trevelyan * the search for national identity in the reunified Germany.